On our recent trip to Warwick, we visited the Lord Leycester Hospital. This Grade I listed building is one of the best preserved examples of medieval courtyard architecture in England and is a charity supporting ex-servicemen. It is located in Warwick, England, next to the West Gate, on High Street.

It is also the location where they film the outside shots of the offices of “Shakespeare & Hathaway: Private Investigators”.

Being big fans of the show, we recognised the courtyard and steps up to their offices. However, we were surprised to see how small the space is to park Luella’s mini.

We couldn’t resist having our own Shakespeare & Hathaway moment on the balcony.

This is a comedy-drama mystery television series set in Stratford-upon-Avon.

In the first series viewers were introduced to Ex-Detective Inspector Frank Hathaway, a debt-laden private investigator and his office assistant, Sebastian Brudenell, a RADA-trained struggling actor.

Luella Shakespeare initially hires Frank to investigate the fiancé……..only for her new husband to be killed at the reception leaving her the prime suspect! To clear her name, Luella starts working with Frank and Sebastian to crack the mystery of what really happened. Proved innocent, she uses her recovered savings to buy into Frank’s business. And so “Shakespeare & Hathaway – Private Investigators” is born. 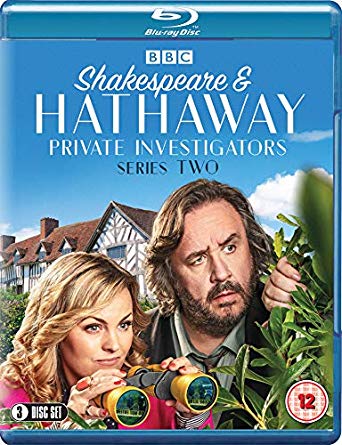 The third Series of the Hit BBC Show

Combining corpses, comedy and cracking mysteries, this quirky crime drama has won the hearts of over 200 countries. Now that Lu has passed her private investigator exams and Frank has tidied himself up a bit, there is no stopping them. But murder, kidnap, blackmail and infidelity still abound in the pretty tourist town of Stratford-upon-Avon. An ageing heavy metal star with a pact with the devil. A Shakespeare museum full of deadly secrets. A King Lear story set in a carpet warehouse.

Welcome to the birthplace of the Bard, where low-life criminals get caught up in deliciously high drama.