On Sunday 16th December 2018 Channel 5 are screening a murder mystery based on the Agatha Christie’s Crooked House.

Charles, the son of the assistant commissioner at Scotland Yard returns to London after WW2 from Cairo and discovers his ex-lover’s grandfather has been murdered. Sophia,  the old mans grandaughter, is convinced he was murdered by a member of their idiosyncratic family. She arranges for Charles, the spy-turned-private-detective, to investigate.

It soon becomes clear that nobody in the household has an alibi, and even Sophia may have a motive for murder……

Max Irons plays Charles Hayward, who is drawn to the crooked house of the title and discovers a sprawling estate filled with bitterness, resentment and jealousy.

I knew nothing about this classic Agatha Christie story when I sat down to watch it earlier this year. I was expecting good things as it boasts an all-star cast.

The top billing in this twisted tale, according to my listing magazine, was given to Gillian Anderson. However, I found Glenn Close to be much more prominent as the family matriarch Lady Edith de Haviland.

With such an obnoxious family it was difficult to like any of the characters. Consequently, this film will not make it onto my list of favourite Agatha Christie adaptaions. 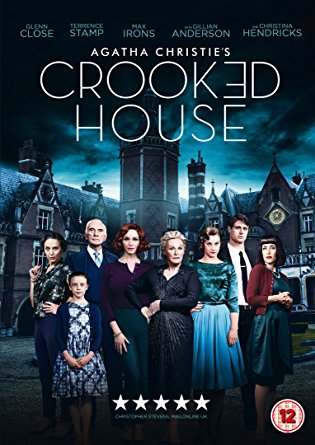