A Christmas Carol by Charles Dickens

A Christmas Carol has one of the most memorable first lines of them all. It’s gloomy opening establishes the world of the novel and also tells the reader in no uncertain terms that one of the characters – Marley – is dead.

The novel then shocks the reader, and the main character, Scrooge, by showing that being dead did not hinder Marley from making an appearance later in the book. 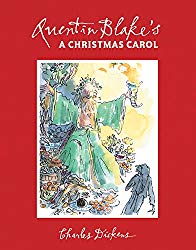 The series Dickensian starts with the same premise.

But this time, instead of Marley reappearing, the plot revolves around investigating his death. The questions for Inspector Bucket (and the audience) are who murdered Jacob Marley and why did they do it?

This drama begins as a murder mystery in Victorian London.

It expands to offer a glimpse into the backstories to the characters described in Charles Dickens works.  Dickens created around 989 named characters and many of them are featured in Dickensian. As well as Inspector Bucket and Jacob Marley, there are well known characters as suspects such as Bill Sikes, Fagin, and even nice Mr Cratchit.

A counter story running through the piece concerns Amelia Havisham. She inherits her father’s estate, to the chargrin of her brother.  And love may (or may not) be in the air for Amelia and her friend, Honoria. This part of the drama plays out more like a soap opera than a murder mystery.

The murderer is revealed!

Does Inspector Bucket solve the crime? Yes, he does.

But even when the murderer is revealed the drama continues. The plot lines for the other characters, notably that of  Miss Havisham, continue to play out.

So who was the murderer? Now, that would be telling. To find out you’ll need to watch  the series.