Spoon was a steely character who didn’t liked people trying to outshine him.

Both men were rivals in the field of electronic innovation.

Both had spent time and money trying to outdo the other.

Both were concerned about the problem of sustainable energy.

And now both were locked in a vicious battle to develop a sustainable energy supply.

It appeared to everyone that  Benedict Egg may have won, when he announced a press conference.

The audience of journalists, VIPs and  guests of the Egg Corporation arrived and took their seats.

But, as Benedict  demonstrated his companies exciting discovery something went wrong.

Benedict was electrocuted by his own device!

Was this a terrible accident?

……….Or maybe this was no accident but  MURDER!

With a room full of suspects, who did fry Egg?

It was up to the audience, with the help of Chief Inspector Fawken Knife, to determine the guilty party.

So who do you think did it? 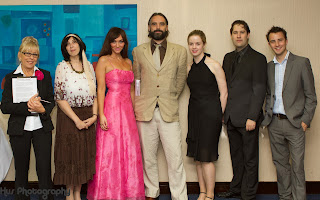 Photography by Hussein Ahmet of  husphotography.

This murder mystery is written by Catherine Skeggs.

This event was produced by  Invitation To Events http://www.invitation2events.co.uk