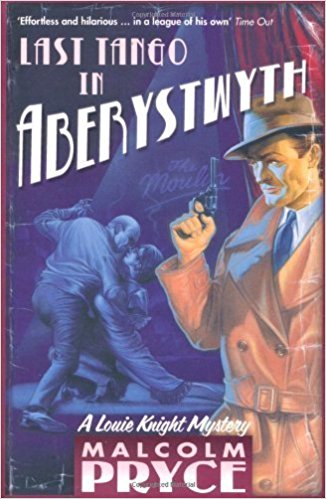 Malcolm Pryce’s hardboiled detective is back cavorting down the mean streets of Aberystwyth in the second book of the series……..

Dean Morgan, who teaches at the Faculty of Undertaking, comes to Aberystwyth to pick up course materials. Checking into a notorious bed and breakfast ghetto, he mistakenly receives a suitcase intended for a ruthless druid assassin.

Soon he is running for his life, lost in a dark labyrinth of druid speakeasies and toffee apple dens, where every spinning wheel tells the story of a broken heart.

I read this book as a stand alone novel, ie I hadn’t read the first novel in the series. Although the story could be followed, it would have helped to know the backstory and characters that were set up in book one, Aberystwyth Mon Amour.

It was quite a complicated plot, but at the end of the book, all the loose ends tied up neatly.

if you want to give it a go, check it out on https://uk.bookshop.org/lists/malcolm-pryce-the-louie-knight-series-aberystwyth-noir or on amazon, although I’d suggest starting the series from the beginning.

One thought on “Last Tango in Aberystwyth”